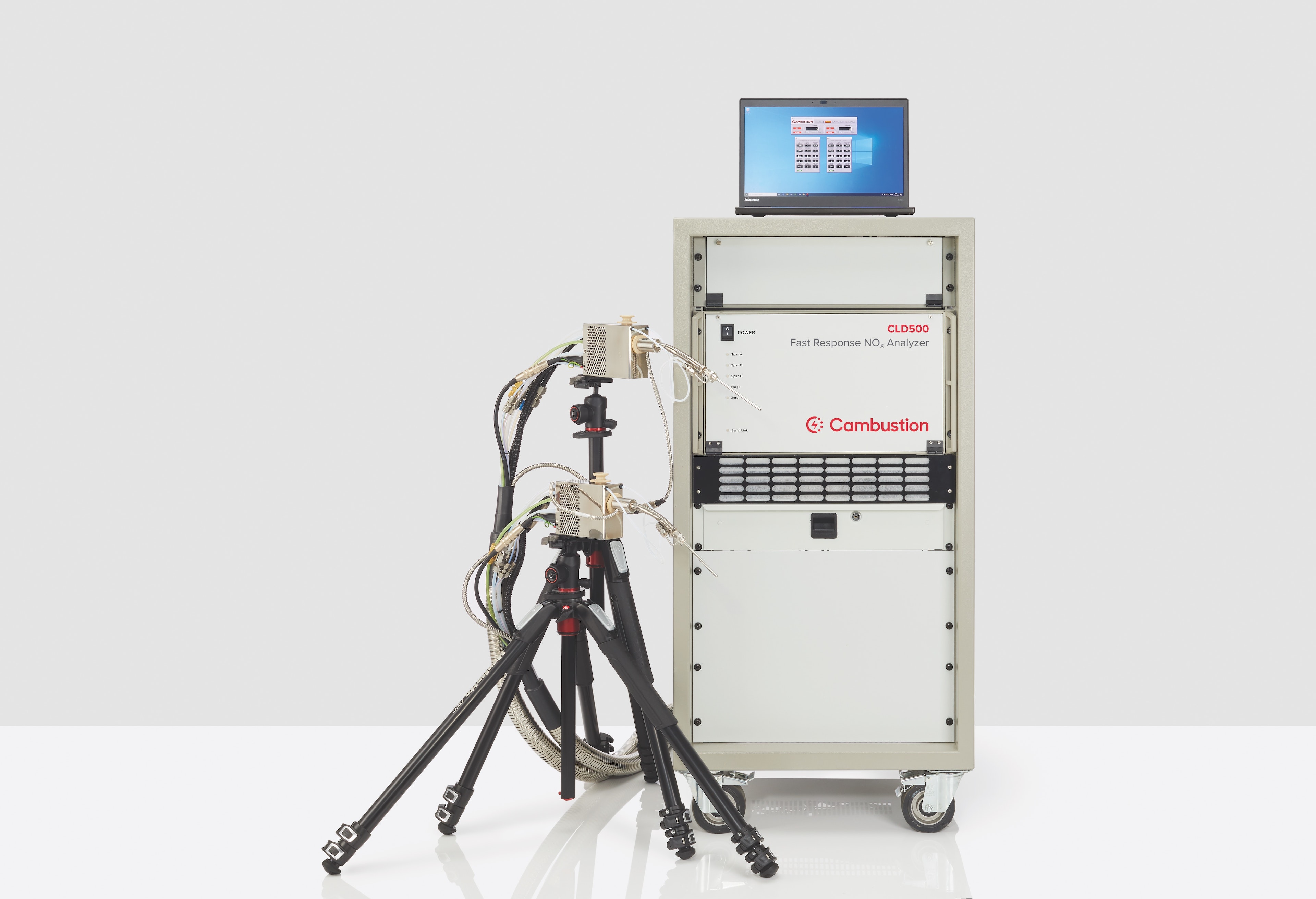 The Chemi Luminescence Detection (CLD) measurement principle is the industry-standard method of measuring engine exhaust NO concentration. Conventional CLDs have response times of 1-2 seconds, and are typically used to measure "bag emissions" where the concentration changes very slowly.

A need for fast emissions analyzers

During the 1-2 seconds it takes a conventional CLD to respond, an engine will undergo many firing cycles. The conditions inside the combustion chamber can vary significantly between successive firing cycles- particularly when the engine conditions are changing rapidly such as during engine start or speed/load transients. The Cambustion CLD500 (sometimes known as an fNOₓ or fast NOₓ analyzer) has a time response as low as 2ms T10-90%. This allows the CLD500 to distinguish between two adjacent firing cycles, and even offer information about the variation in NO concentration during a single exhaust stroke.

Accurate measurement of exhaust emissions brings valuable insights into engine operation, and assists calibration engineers in reducing the engine out emissions. This can assist in emissions compliance while reducing after-treatment costs. 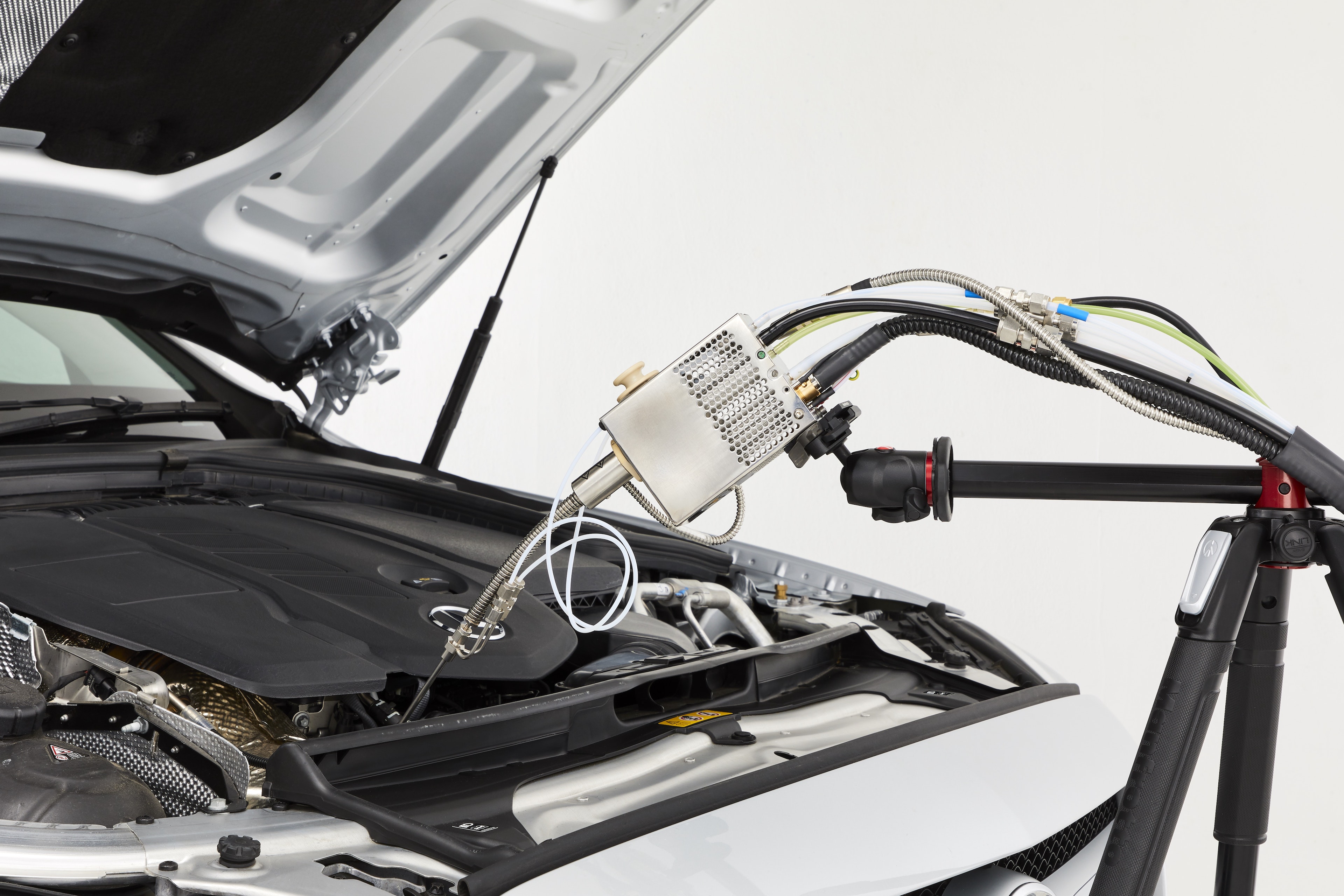 The CLD500 can also measure NO₂ through the use of optional NOₓ converters (based on the stainless steel method of NO₂ to NO conversion). With these converters the CLD measures total NOₓ. (There is a cross-sensitivity to ammonia and other reductants in the sample). When fitted with the NOₓ convertors, a 10ms T10-90% response time is achieved.

The ability to record NO emissions data on such a fast time scale has opened up a range of study areas.

The ability to measure cycle by cycle NO and NOₓ allows researchers and engineers to investigate and quantify features such as NOₓ breakthrough during lambda excursions on a gasoline engine.

Common to both Diesel and gasoline engines, EGR is a widely adopted technique for controlling NOₓ emissions. During transient operation, delays and imperfect control of EGR flow may lead to spikes in transient NOₓ emissions. Furthermore, distribution of recirculated exhaust gas between cylinders on a multi-cylinder engine is not always equal. This can lead to one cylinder receiving too little EGR, with a consequent increase in NOₓ emissions. The ability of the CLD500 to measure gas from a single cylinder (sampling in the port) as well as in the mixed exhaust provides crucial data to overcome such issues. Combined with fast CO₂ measurement from Cambustion's  NDIR500, the CLD500 allows the user to directly correlate NOₓ emissions and delivered EGR, even on a cycle-by-cycle basis.

A current major concern with urban air quality is the NOₓ emissions from diesel passenger vehicles. Although legislated NOₓ limits for new vehicles have been steadily reduced over many years, a similar reduction in NOₓ air pollution hasn’t been achieved. This has been attributed to the Real World Driving Emissions (RDE) of vehicles being only poorly represented by the standard European Drive Cycle. Most OEMs are investigating “off-cycle” emissions by using on-board analyzers to measure directly from the vehicle’s tailpipe during urban and rural driving. The CLD500 fast NOₓ analyzer can be configured to measure the fast transient [NO] emissions from any vehicle and some data showing the real time [NO] emissions during a real world driving can be seen here.

Selective Catalytic Reduction (SCR) is another method of reducing NOₓ emissions using ammonia or urea, and is increasingly used in heavy duty Diesel applications. SCR requires careful control of the conditions and reactant concentrations in the catalyst, and the CLD500 is used to monitor catalyst performance, both at cold start and during transient operation.

Lean NOₓ Trap (LNT) is another technology for reducing NOₓ emissions- using a NOₓ absorbing element which stores the NOₓ, and periodically purging the absorber while providing excess hydrocarbons which react with the NOₓ as it is released. The reactants then exit the tailpipe as H₂O and N₂. To perform well, the LNT and supply of reactants must be carefully matched to the exhaust conditions. The CLD500 is used to monitor LNT performance, even during transient conditions.

The CLD500 is available with support for AK protocol, allowing easy integration with the test bench for improved test reliability and reduced workload.